The expedition into the Mojave Desert with the San Diego Natural History Museum’s Bird and Mammal Science Team is almost two weeks past. With all the travelling on my return trip, I’m only now finding time to share some of the details. While camped with the science team, most of my time revolved around mammalian subjects, but when I was able, I chased birds. Further delaying my updating of this blog has been the time I’ve allotted to creating a new GALLERY (find a link below, or see menu above, under “Mice and Rats“) for the small rodent subjects that have occupied my attention these past months.

Earlier in the season, while camped in Joshua Tree National Park, the team caught quite a few pocket mice (Chaetodipus), but while we were in the Mojave Desert, we caught none of these. I asked Scott Tremor (Mammal Team leader), what would be the reason. The explanation was, that due to the season’s cooler temperatures, these mice remained underground. Pocket mice regulate their bodies during cooler temperatures by a means scientists call torpor. I’ve read about how hummingbirds used this technique nightly to tone down their energy intake requirements and survive the period between dusk to dawn. Now I’ve learned that pocket mice too, use this method to allow themselves to stay warm in their burrows when the cool temperatures of the high desert shifted the energy economics, and the cost of gathering food outweighs the expense required to collect nutrients. Deer mice (Peromyscus) and kangaroo rats either are not able to employ this technique or do not need to. Nor were the woodrats and squirrels as they were plentiful even at this season.

Before I began working with the Mammal Team, my view of rodents was narrow and I viewed them all as vermin, with disdain. With education comes understanding, and as my views about these creatures expanded, I started to recognize differences between the specimens brought to me to photograph. Distinguishing the genus differences is fairly easy, but species within the genus represents a bigger challenge.

The majority of the species I’ve been presented with on the outings with the SDNHM team, have been from three genus; peromyscus, chaetodipus, and dipodomys (Kangaroo Rats). Occasionally the team would bring me a Grasshopper Mouse (Onychomys), Western Harvest Mouse (Reithrodontomys), or a woodrat (Neotoma) to photograph. These subjects are each of a different genus and have varying degrees of identifiable differences from the first groups I mention here. Kangaroo Rats have very large heads, short front limbs and long back legs. Deer Mice have proportionally smaller heads and very large ears. Their body is shaped like a classic ‘mouse’ (sorry for the lack of a better description, but that’s the impression I get). Their necks are more obvious and seem to connect their heads to their bodies. Mickey Mouse was peromyscus. Pocket mice have the smallest ears of any of the creatures I’ve met on these expeditions. Their bodies are ‘torpedo-shaped’, as their heads seem to meet their bodies without the benefit of a neck. Additionally, Pocket Mice have long spiny hairs on their backs and especially their rumps. To the trained biologist, there are numerous identifiers I fail to mention here, but these are my observations, untrained in the finer issues important to science. 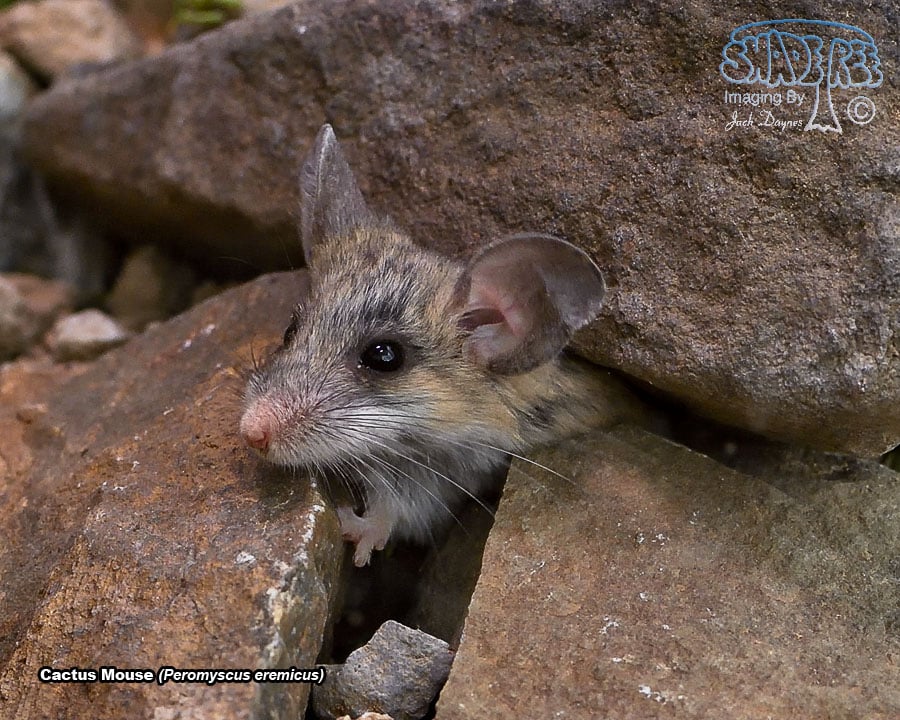