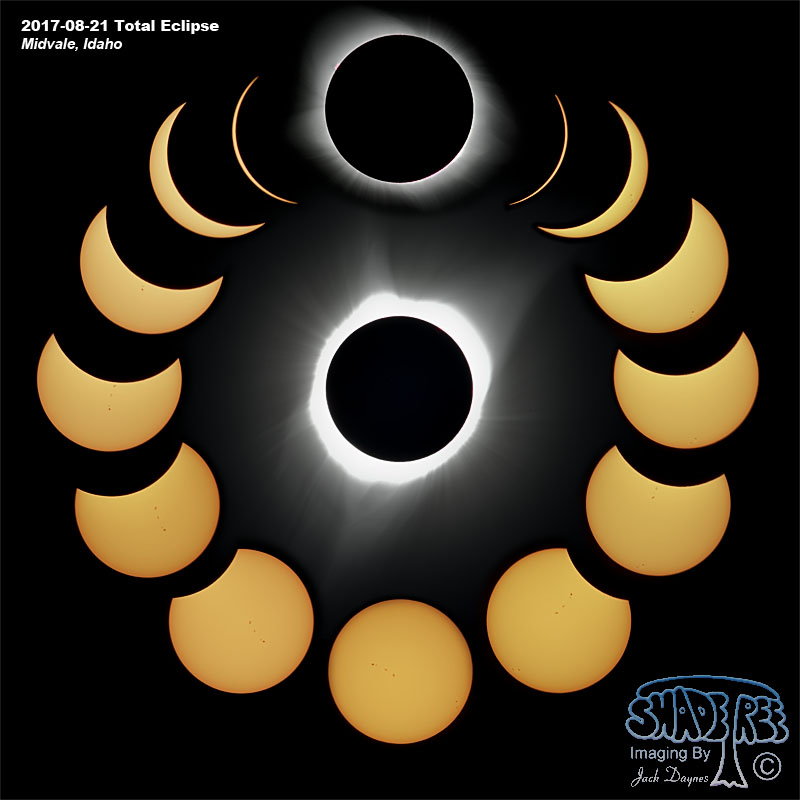 Anyone who witnessed last week’s total solar eclipse is not likely to forget the spectacle … EVER! When my friend Jerry called last February suggesting we rendezvous in Idaho after a layover in the Salt Lake area, it was the opportunity to revisit Utah birds that initially attracted my interest, but after mulling over the possibilities, photographing the eclipse germinated in my imagination. The opportunity to hang out and learn from my friend, who’d done so before was too much to resist.

After several delightful days birding with Jerry and Joe, Jerry and I headed into Idaho. Jerry had family near Boise to visit and I had a friend of over 45 years in Payette I was looking forward to seeing. After some discussion where best to position ourselves, we decided that Midvale Idaho was our best option. Jerry’s daughter Rachel had friends there who’d offered their front yard for our viewing pleasure. We all drove there on Sunday (8/21) to get an idea of the layout and determined it fit our needs perfectly. Early Monday morning we gathered all Jerry’s family, I jumped into one vehicle and we were off.

Things go embarrassing after reaching our destination and setting up our camera gear. I noticed a rather large cavity in my camera where the battery is supposed to live and realized I’d left it in the charger back in Payette. My heart sank with the realization I might not be taking pictures in the once-in-a-lifetime opportunity. I was fortunate enough to be in the company of good people. Rachel’s husband Adam volunteered to drive me back the 35 miles to Payette. Traffic was light, and we got back in plenty of time to take some razzing from Jerry and still have 20 minutes to spare before the big event started.

We were only 10 or 11 miles north of the center of the path the lunar shadow’s path. The sky was perfectly clear. We had an unobstructed view of the sun-moon passage. We were with good people. What could be better?

When the moon started eating the sun, four cameras (Me, Jerry, Rachel, and Jerry’s nephew Barry) clicked away in earnest. At approximately 5 minute intervals, we repeated the ritual until the moon fully engulfed the sun’s light. An hour and a quarter from the beginning, this small town’s temporarily inflated population began hooting and hollering as the sun’s corona flashed a stunning ring around the moon which could be enjoyed without the aid or protection of sun filters. For the photographers, it was a frantic moment of removing filters and clicking as many variations in exposure as time permitted. The two minutes that the moon blocked the sun passed too quickly, and the photographers placed filters back on the lenses.

We all remarked how the temperature dropped from too warm to feeling like we needed a jacket. Also remarkable was the mass exodus that began within a few minutes after the sun began peeking from behind the moon. As photographers, we were committed to experiencing and recording the full spectacle, an hour and 15 minutes later. When we finally picked up our gear and headed south for home, we found out how many people were tucked into all the nooks and crannys watching the eclipse when we hit a solid line of cars on their exodus. I was thankful that none of them were on the road while I raced to retrieve my camera battery.