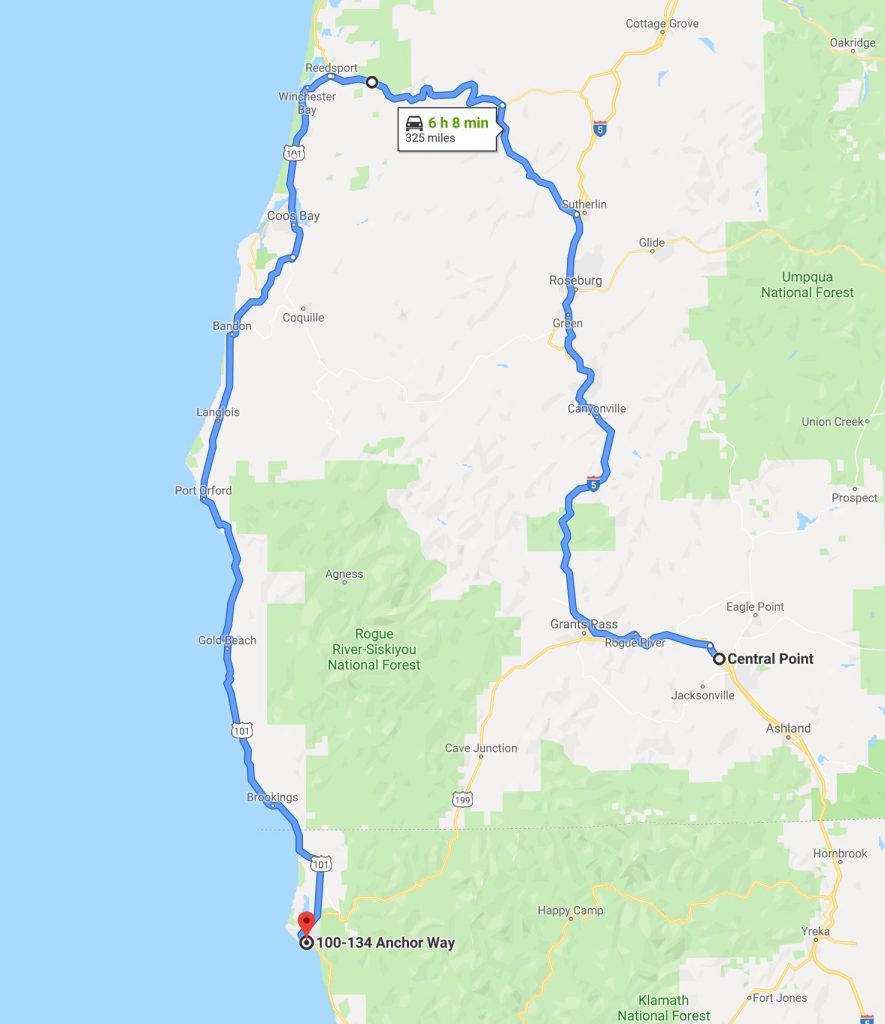 The smoke in southern Oregon continues to be a plague upon all who live there. Los Angeles, as I write has an air quality index of 68 and max 80 (and the news media says “poor LA”), while Medford currently is 321 with a max 443, yet Tinseltown gets the press. Reports for Florence indicate 152, so it’s better, but still “unhealthy”. Further south in Brookings it’s reported to be 126.

I should like to acknowledge the help provided by the Oregon birding community. My request for information yielded several helpful replies. Barbara Combs provided a series of her favorites, and Yvette Uber suggested Bolon Island, but there was construction on the bridge just to the south, and by the time I saw the exit, it was too late to get off the road and no way to turn around <sigh>. Stephen Holzman and Bob Archer sent the same link <http://www.ecaudubon.org/birding-locations>, which I’ve been using to navigate, choosing stops every few miles to investigate as I head south. I was tempted to start out further north, but ultimately I opted to drive the two lane roads from Sutherlin and follow the Umpqua River into Reedsport, then north to Florence.

I started out in my investigation of the Oregon coast north of Florence at Siuslaw North Jetty. While there was still smoke in the air, it seemed elevated above the ground, causing a yellow cast to the sunlight, but not as much torture to the eyes and lungs. There was not a wealth of birds, though California Gulls, crows (assume American, but the calls were somehow raspier than I’m used to… could they have been Northwestern? ), cormorants (assume Double-Crested), turn stones (assume Black) and kingfishers were there. I drove South 3 miles to Cleawox Lake day-use area and found it very quiet bird wise, beautiful but quiet. I saw Song Sparrows which were darker than I’m used to seeing in Southern California. The only other birds at this lake I could detect we’re Steller’s Jays which were heard not seen.

Twenty-three miles south at Winchester Bay I stopped to examine the bird life the parking area with lots of California Gulls, crows and Turkey Vultures loafing in the lot.

I finished my drive near Jordan Cove, on the northern arm of Coos Bay. I discovered that Jordan Cove is cut off from public access by a rail line that surrounds it on the land side, so I contented myself to a wide roadside area at the western end of the bridge joining the causeway to the dune covered isthmus between Coos Bay and the Pacific Ocean. At this location I saw several Great Egrets, a couple cormorants and gulls, and a Belted Kingfisher perched on a tall steel stake in the bay. Tomorrow I will drive to the Pacific shore and see what surprises it might hold.

No pictures with this post. I’ll try to do better tomorrow.