Before I left Albuquerque for points south, I stacked up several days’ worth of images from my last few photo safaris. In most cases, I’d have boondock camped and worked on the blogs to share my images and stories. Here in mid-winter central New Mexico, I felt like settling into a nearby RV Park. For a mere $20 a night, I could plug into power and have a quiet place to keep warm and finish my work. For two days I stayed near the Bernardo reserve, then I drove south to San Antonio and stayed two more nights south of town. After catching up with my work, I extended my stay two more nights, so I could explore nearby Bosque del Apache, and relax without the pressure of a backlog of stories to weave.

Tuesday morning I drove 4 miles south and entered the reserve at Bosque del Apache. I felt my tours at Bernardo had given me all I needed for cranes and white geese, and I hoped to meet other species here. Only a tenth of a mile from the reserve’s entrance is a pond and a location known to regular visitors as The Flight Deck. In years past, the morning lift-off flights of cranes and geese were dazzling. I took a spin past the large, shallow pond and thought I’d capture Western Meadowlarks, Say’s Phoebes, and any other passerines I might encounter.

After exploiting a few opportunities, I prepared to move on and explore the rest of the reserve, when several thousand white geese descended on the waters next to my parking spot and disturbed the peace and tranquility that I’d been enjoying only seconds before. In past years, these ~2,000 geese would have been a small fraction of the population at Bosque del Apache. But today this was the sum-total of all the white geese on the reserve. Still, enjoying the experience and observing the antics of this jostle of large white birds, I could not pull myself away.

The first order of business for the birds after landing was quenching their thirst. No doubt they’d been foraging in nearby dusty-dry agricultural fields, so as soon as they touched the water’s surface, they dipped their beaks and guzzled their fill. Once they quenched their thirst, bathing was the next order of business, and the spectacle of hundreds of large geese splashing in the shallow water entertained me. Despite my resolve to not shoot more geese pictures, I could not help myself from giving in to the scene before me. Soon the great throng of geese began drifting to the nearby shore and approached so close that frame filling head-shots were possible.

With so many white geese, I needed a mental filter to avoid being overwhelmed by the chaos, so I began looking for the Ross’s Geese in the masses of birds around me. Only a small contingent within the crowded mass were Ross’s Geese, but they seemed to prefer the center of the crowd over the margins. Even when they reached the shore to loaf on land, they seemed to stay several rows behind the larger Snow Geese. Being smaller, I assume there was safety in numbers, and blending into the crowd had benefits.

The album below contains three galleries with 72 images combined. The close-up shots I captured of the Snow Geese and the Ross’s Geese might interest those folks who enjoy studying the subtle differences in these two similar species. 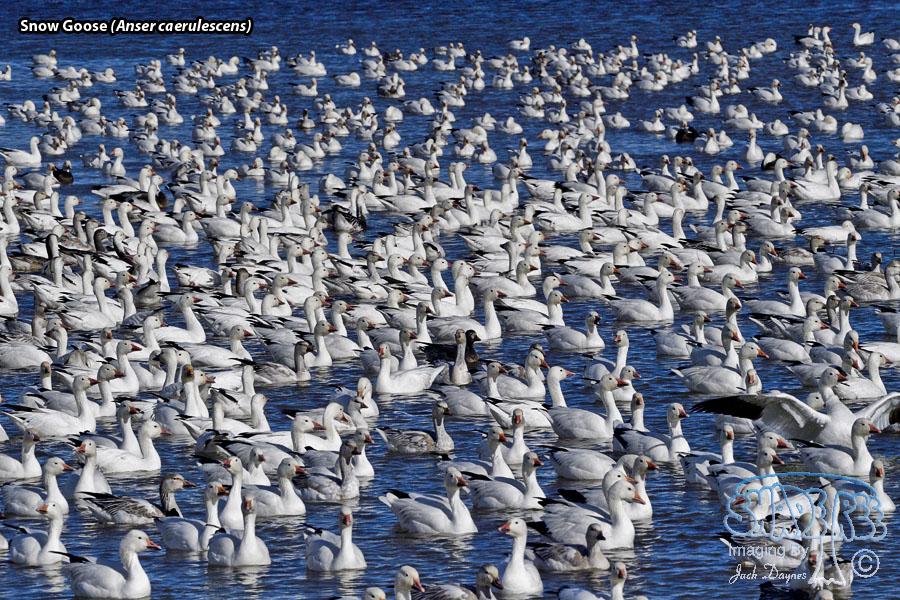