This video is from “back-in-the-day” recorded on 8mm film.

The ‘Flame-In-A-Bottle’ trick is something we used to enjoy back in the late sixties, when our lifestyles were more in tune with those times. (‘nuf said)

This second video was recorded with my cellphone. The video is better, but I filmed it vertically and haven’t figured how to rotate the video yet. Still, you’ll get the idea. Just be sure your sound is on for this clip.

Part of the fallout from moving out of my family home of the past sixty years has been the dredging up of old memories. Some of those memory triggers come from nick-knacks, clothes or artifacts from the past, but most have come from examining old photos. In scouring the contents of my mom and dad’s collections, I found some old 8mm film footage my dad had stored away. I examined most of the reels by using a magnifying loop over a light box. As one might expect with home movies, there were many forgettable sequences, but hidden in the footage were a few sections that brought a grin to my face. The flame-in-a-bottle stuff falls into that category. 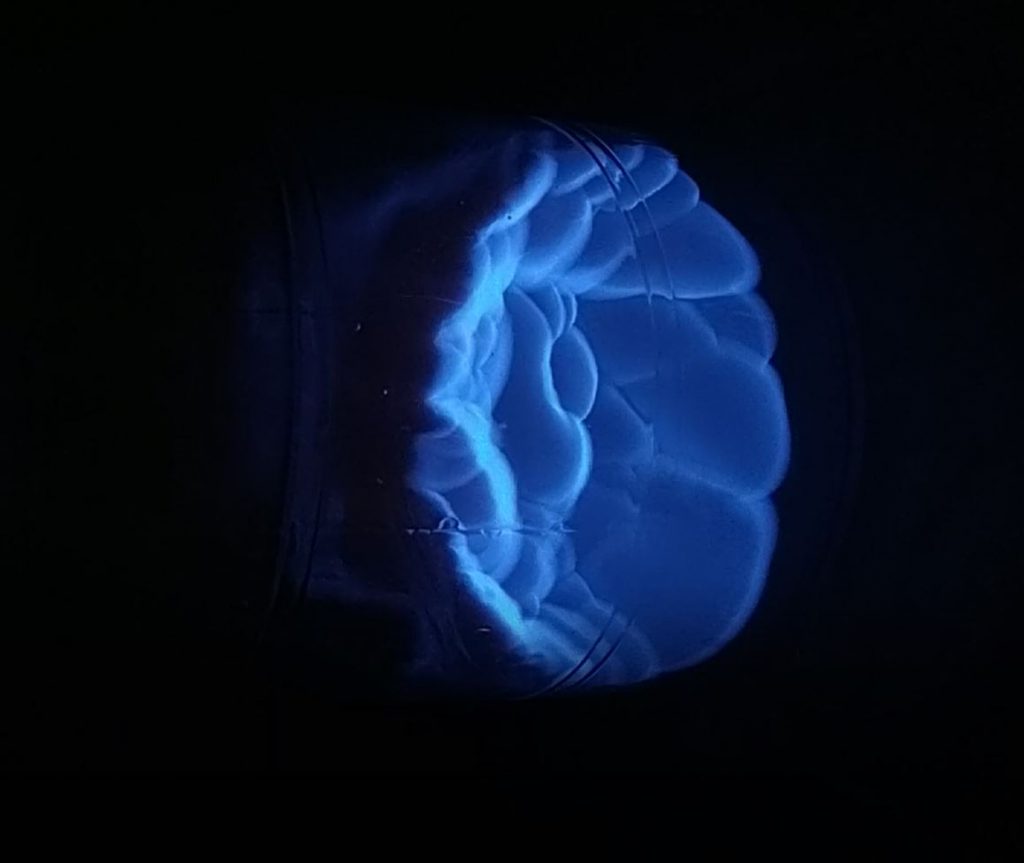 I don’t recall how we learned of this trick, but I remember the endless, always changing shows that this little theater put on. It’s a shame we didn’t have today’s technology to record these shows, as the 8mm film does not do it justice. When first witnessed, the fear was that the bottle would explode under the sometimes violent ignitions. However, though we broke several bottles over the course of the time we indulged in this practice, there were *NO* explosions. On those few occasions when we broke a bottle, it was always on implosion, and a chunk of the bottle would fall harmlessly inwards, rendering the theater useless for further shows (until a replacement bottle was found).

Each show was as unique as a snowflake, and like snowflakes there were certain characteristics which were recognizable. One element we always enjoyed was ‘the curtain’, where a plane of blue flame would grow downwards, making an eerie low pitched whistle.

Often the curtain would be followed by ‘the dance’. This part of the show was the portion that caused the most high anxiety moments for the audience, especially the uninitiated. Because the first part of the show ejected most of the air from the chamber, there would follow a massive ‘inhaling’ event. If there remained some residual fuel (usually isopropyl alcohol) and a remnant flicker, reignition would occur after the injection of new air, causing another rapid ejection event, triggering another inhale. The cycle of inhale-exhale could be quite rapid, often accelerating to more rapid repeats, until it would conclude with an exhale that extinguished the flame or the fuel inside.

A third show we learned to expect was ‘the gush’, where the flame would drop to the bottom of the bottle and extinguish itself in one brief glorious moment.

The sounds associated with the show were an experience unto themselves. We enjoyed them as much as the visual experience … except on one occasion. A friend I’d recently met had just finished a tour of duty as a grunt marine in Vietnam. He’d never seen this show before, and when we set it off, it resulted in a ‘gush’ event. We could not understand the effect it would have on our new friend. It caused him to dive over a couch in the room and hit the floor in a reflex action he learned in his combat training. After recovering, he explained to us that the ‘whooshing’ sound produced was just like the noise a hand grenade made before it exploded. None of us had a clue before this moment just how embedded the experience of combat was in our veteran friends, nor how it impacted them after returning home. I, for one, gained a new respect for what these vets endured.