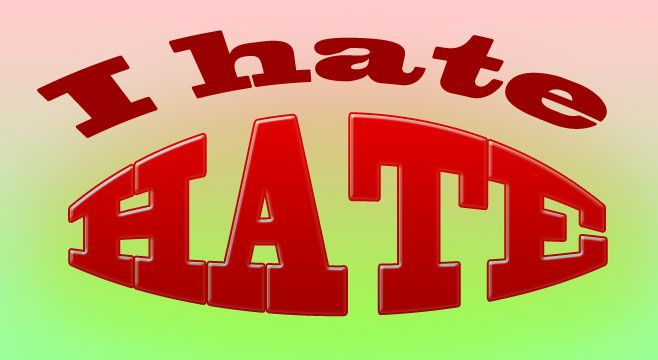 Does hate exist? From a philosophical perspective, a case could be made about the non-existence of things negative (hate being the negative of love). In short, the argument goes that if a quality can only be described by the absence of its opposite, then it doesn’t exist on its own merits. A defender of this position would argue that shadows don’t exist, because they are the absence of light. A shadow cannot overpower the light, but the presence of light summarily dismisses the shadow. Casting aside temporarily this philosophical distinction, the discussion I have in mind uses the traditional meaning of the term hate.

I hate injustice. There are those among us who feel entitled to advance themselves and/or their causes, disregarding the damage to the rest of society. They haven’t figured out that just because you can, does not mean you should.

I hate racism and bigotry. These flaws in the thinking process of certain segments of society are products of the weak-minded among us who can’t see past our external differences. Rather than evaluate a person by “the content of our character” as the great Dr. King once dreamed, they can only see skin deep.

I hate pride. There’s a good reason it is listed as one of the seven deadly sins in the Judeo-Christian tradition. I’m not talking about a workman’s pride in his craft. I speak of folks who would elevate themselves above others simply because ethnic, social, religious or economic status. After a careful look at world history, it should become clear that such toxic thinking has infected societies across the globe and throughout time, justifying all manner of atrocities.

I hate divisive rhetoric. An “us-against-them” mentality would have us continually caught up in a tangled and toxic web, playing one segment of society against the other. Even the well-intentioned “Black Lives Matter” movement plays into the trap of division. I admire and even agree with the societal outrage raised by recent deplorable events, but I also recognise the rhetoric thus spawned undermines Dr. King’s dream.

I hate bullying and abuse of power. All of the categories above, to a degree, apply to this hateful practice. But with the current administration’s alarming tactics of using secret police to wage war on its own citizens, I’m given cause to raise the point in this discussion. I’m reminded of the mid-1950s when McCarthyism ran rampant in the government, branding people as “bad people” and persecuting them for their perceived political views. Often people innocent of any crime were punished by being placed on a “blacklist”, and through cooperation by heads of industries, these individuals were prevented from being hired in the industry they were expert in. Today’s abuses are substantially more alarming. We’ve started kidnapping citizens without due process because they’ve executed their right to free speech guaranteed under the constitution. I’m horrified at how selectively blind supporters of the present administration are, and how readily swallowed are the flawed justifications and explanations that have been provided. The ends do not justify the means. We’ve fought wars with countries who used such tactics, and now we’re doing it to ourselves.

In 1905 noted 20th century philosopher George Santayana said: “Those who cannot remember the past are condemned to repeat it”. In 1965 Bob Dylan sang, “You don’t need a weatherman to know which way the wind blows.” Does anyone else see a parallel with 1930s Germany? I’m not a political animal, but damn! What’s next? Brown shirts and Jackboots?