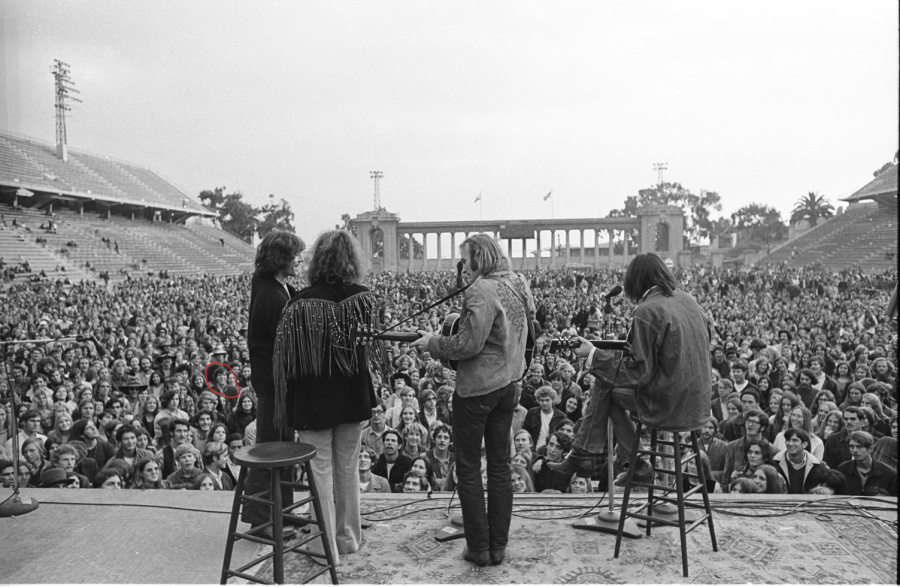 There is a joke: “If you can remember the sixties, you probably weren’t there.” But there was a day in December 1969 I can remember well. A dear friend forwarded me the picture shown on this page and recognised my then 20 year old mug in the crowd. I’m sure Henry Diltz took this picture. He did so much great photography for CSNY and other musical groups of this era.

My friend thought the picture was from the October Gnurl Festival which we all attended, and featured Poco, Chicago, Country Joe and the Fish, and followed the history-making Woodstock Festival in New York two months earlier. But this concert was on December 21, 1969, a few days ahead of the last time most of us would see a “6” in the ten’s spot of the year. Canned Heat opened the show.

I have two indelible memories of the show. Crosby, Still and Nash began their set, and later brought out Neil Young. When Neil walked on stage, he had the most mischievous grin on his face I think I’ve ever seen. The other memory came when Stephen Stills, perhaps my all-time favorite guitarist, was doing a solo set with his acoustic guitar and he’d played “Black Queen”. Stills is a talented multi-instrumentalist, but whenever I get to hear him on acoustic guitar, I become spellbound, so unique and powerful is his playing. After finishing the song, but before he could exit the stage, Poway’s own lovely and irrepressible Lisa Harmon shouted from within the crowd twenty feet to my left “Play Treetop Flyer!” — I’d never heard of the song, even though I thought I was a consummate Stills fan. I don’t know where she’d come across the number, but I’m ever grateful that she did. Stephen could not resist this pretty girl’s request and played the song. Very cool!