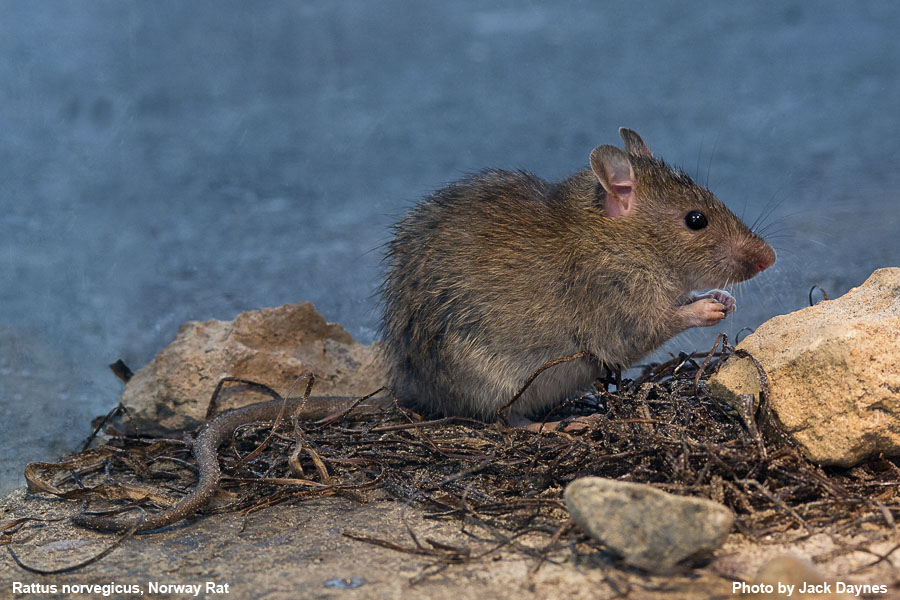 Call it the brown rat, common rat, street rat, sewer rat, Hanover rat, Norway rat, brown Norway rat, Norwegian rat, or wharf rat, Rattus norvegicus is one despicable rodent. As part of the process to prepare the upcoming book, The San Diego County Mammal Atlas, I had to get up-close and personal with these creatures. I can now testify with confidence that these filthy beasts smell bad. We collected this animal at Mariner’s Point in Mission Bay (San Diego) and as dawn broke, it was obvious the area is overrun with them. They were seen scurrying over the sand and rocky rip-rap at the water’s edge.

I’ve since learned that these rats, alien invaders to most places on our planet, did not originate in Norway as their name would imply. Science now believes they began their expansion and conquest of the earth in northern China and Mongolia and followed humans by any means necessary, ultimately settling most places we’ve travelled on the globe. Given they produce new litters up to five times a year, it’s understandable that in some cities they outnumber humans. Eradicating these animals requires a monumental effort and has only been successful on a few Pacific islands and in Alberta Canada. It’s more likely that the Norway Rat will survive long after humans have outstayed our welcome.